It seems that all I’ve made lately is fried food and bread.  Not true. 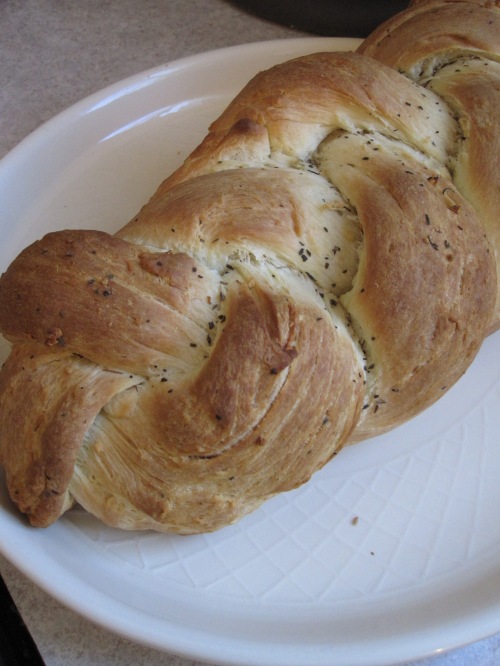 I got this recipe from the wonderful Baking with Julia, written/compiled by the talented and famed Dorie Greenspan.  This book is amazing.  From the glossy photos to the incredibly detailed intros to each recipe, it’s 100% high-class.  Which is slightly overwhelming, honestly, until I make something like this challah and it is so fantastic, so melty in your mouth, with the eggy, buttery crust and the perfect amount of chewy in every bite… and then, all the overwhelming just slowly fades away and instead I’m left with a slightly-smug feeling of victory. Victory over challah.

It’s good. Really, really good. And it’s fun to say. There’s something endearing about watching a fully-grown, freckled white man say “Challah!” with his arms in the air, gripping a piece of warm buttered bread, as if shouting out “hollah” to his homies. 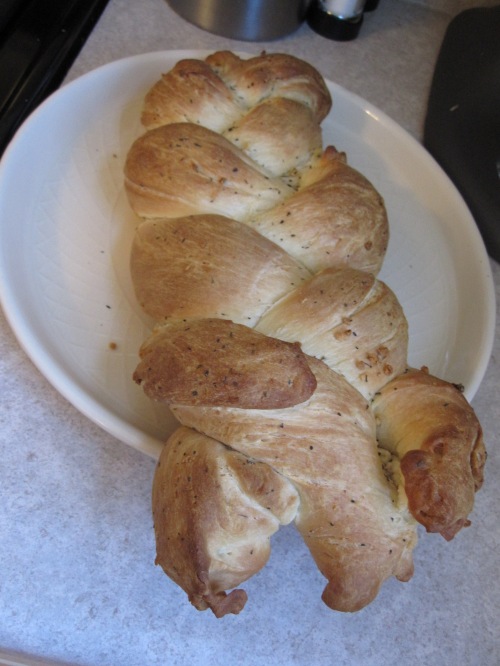 Just be sure to pinch and fold under your ends tightly, or else you end up with bread that’s beautiful on one end and has a claw on the other.  Challah claw!

*Note: this recipe makes two loaves, but can be halved pretty easily, which I’ve done a few times. However, I don’t recommend it, simply because the leftover loaf makes such delicious french toast a few days later! Store your leftover challah at room temperature in sealed plastic bags; it may start to taste stale after 2 days, but should keep for up to 5.

Challah
recipe by Lauren Groveman, from Baking with Julia

Brush a large mixing bowl with some of the melted butter; set aside the remainder.

Whisk the yeast and a pinch of the sugar into the warm water. Let rest until creamy, about 5 minutes.  Cut the 1/2 c of butter into small pieces; place in a saucepan with the milk and heat over medium-low until the butter in melted.  Add the remaining sugar, the honey, and salt, stirring to dissolve.  Pour into a large mixing bowl and let cool to 110 degrees or cooler, if necessary.

Add the creamy yeast and eggs, stirring with a heavy wooden spoon.  Add the flour 1/2 cup at a time, stirring vigorously with each addition;  stop adding flour when you have a dough that cleans the sides of the bowl and is difficult to stir. Turn the dough out onto a floured surface and knead until it is smooth and elastic, about 10 minutes. (This can also be done with a heavy-duty mixer and dough hook.)

Form the dough into a ball and set inside the buttered mixing bowl. Brush the top and sides with a bit of the remaining melted butter, cover with plastic wrap, and let rise at room temperature until doubled in volume. (This took me about 90 minutes.) Then punch it down to deflate, recover, and let rise again until doubled, which should take less time than the first rise (45 to 60 minutes).

Line two baking sheets with parchment paper. Deflate the dough, cut it in half with a knife or bench scraper, and cover one piece of dough while working with the other.  Divide the first hunk into 3 equal pieces, and roll each into a rope that is about 16 inches long and slightly tapered at the ends. Lay them parallel on the baking sheet and begin braiding from the middle- braid one side and then the other, smooshing together the 3 pieces at the end and tightly folding them under.  Repeat with the second half of the dough.

Cover each loaf with a damp towel and let rise at room temperature, about 45 minutes or until nearly doubled. Preheat the over to 375.  Beat one large egg;  brush the tops of the loaves before putting them into the oven.  Bake for 20 minutes; remove from the oven and brush the exposed bread on the top with the remaining glaze.  Bake for another 15 to 20 minutes, until the loaves are golden and sound hollow when thumped on the bottom with a spoon or your knuckles.  Let cool before slicing.

Optional: add 1 T. honey to the beat egg glaze for a sweeter challah; or any favorite herb for a savory twist.  We love stirring in a bit of minced garlic, oregano, basil, and thyme leaves, and using the leftover “stale” loaf to make buttered garlic bread a few days later. 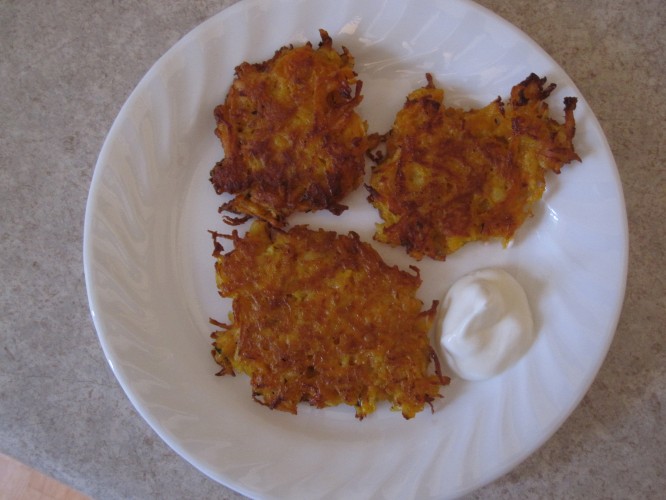 While there’s still some Hanukkah left, I figured I’d post my favorite twist on a traditional favorite.

But even though Hanukkah only lasts 8 days and nights doesn’t mean that you can’t enjoy these throughout the rest of the winter.  They’re a quick and easy way to use up the last few stragglers at the bottom of your veggie bin. And mix it up- or add a regular white potato or two to make them stretch if needed. 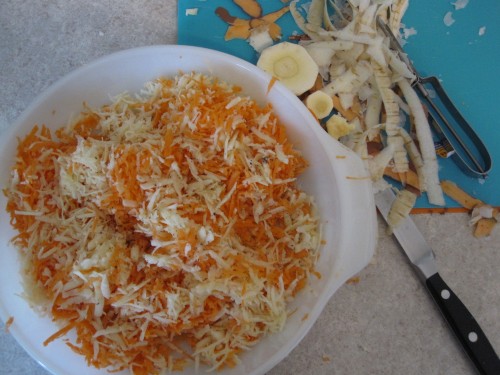 If you’re not sure about parsnips, give them a try in a combo dish like this, or as mashed (sweet) potatoes with parsnips. They’re sort of carrot-y, with a herbier, grassier flavor.  And, call me crazy, but I think I even detect a hint of coconut in there.  Maybe that’s why I think they balance so nicely with sweet potatoes and yams. 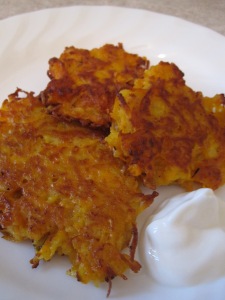 Peel the sweet potatoes and parsnips, and then grate.  Thinly slice the scallion and mix into grate vegetables.  Beat the eggs in a separate dish, and then toss into vegetables; add flour and seasoning and mix to combine.

Heat vegetable oil in a heavy-bottomed skillet over medium high. Once oil is hot, reduce heat to medium.  Drop large spoonfuls into the hot oil and press to flatten; cook on each side for about 3 minutes until golden brown.  Let rest on paper towels, and keep in a warm oven while frying the rest in batches.

And, of course, serve warm with sour cream and/or applesauce. Mazeltov!

Filed under 30 min. or less, Fall, Side dishes, Vegetables, Winter